The buildings tower over me but still the sunlight finds me. The leaves drift down like confetti onto the sidewalks, where dogs of all sizes are being walked by a tall man with leads in one hand and coffee in the other. In the window of a boutique is a poster for The Tompkins Square Park Halloween Dog Parade. I think, “how sweet, a dog dressed up as egg,” when in fact it’s a dog in a Texas Chainsaw Massacre mask.

We once rented an apartment on East Ninth Street opposite Mud Coffee. We would get takeaway coffees and drink them in our apartment. There was always someone sitting on the bench outside enjoying a hot drink and a moment of calm. From the bedroom window of our tiny top floor apartment, I could see a tree, branches swaying in the breeze. Trees make me feel at home, no matter where I am and I would let that tree lift me and ground me.

The October air, October light reminds me every year of you – the end of summer- yet still so warm and mornings with a hint of winter. Oh, the fun I’ve had with you! You’ve served me some of my greatest breakfasts! Breakfast with you is a nostalgically cinematic affair. Pancakes, coffee, home or curly fries, French toast dusted with sugar.

With you, always the freedom to walk – you’re so easy to navigate – down towards the sea or up towards the park. Strawberry Fields. The world still misses you John. Happy eighty-first birthday.

Walking in the winter towards Jane Street for a singing lesson (daring to make my first record), my biker boots just a little too small. Having to pull back my right big toe so it didn’t get squashed. The joy of singing and stepping towards a dream. Daily vocal warm-ups in the little West Village apartment.
Meeting my love at the Jane Street Hotel to have a cocktail on my day off.

New York – you city of wonder, dreams and deliriousness. You’ve given me some of my most happy and most unhinged moments. I almost stepped into ‘crazy’ one visit: jet lag, too many coffees, then wine and my stressed out university friend behaving strangely. Her fixation with celebrity heroin use. Childhood nightmares flooded my mind. I had to escape her railroad apartment.

Obsessed with The Strokes I would regularly walk slowly past Wiz Kid Management, trying to catch glimpses of the band. Through the window I saw a looming shadow so tall it had to be Julian. He was in my dream last night. I was having dinner with him and some other musicians.

Popcorn shrimps and Margaritas at the B Bar – my husband and I loved that place. Met my old school friend Ruth for dinner there once and also Marc (the mystical epidemiologist), and his banking friend whose presence and talk of meth parties gave us nightmares.

Singing our hearts out in the dingy little rooms of Sing-Sing, the karaoke bar on Avenue A. On the same street, an evening with Marc and his (vivacious doctor’s assistant) boyfriend Jonathan. Dinner at their apartment and the big bag full of sunglasses. (Jonathan’s friend was a sunglasses designer, he said. Were they stolen?) My love found the greatest 80’s-style pair (blue and square) he’s ever had.

Talking to Nicole Atkins in between DJ sets at a bar on Avenue A before heading to Sing-Sing again afterwards.

Shopping at Barneys and Saks and Bergdorf Goodman’s where my love bought me a pair of red leather gloves with silver buckles which I still have. I bought DVF dresses at her store, and Marc Jacobs platform walking boots, and high-heeled, black patent round-toed, sixties style ankle boots.

For probably the only time in my life, I had a ‘look’ I loved: Liberty’s brown faded plaid knickerbockers, worn with either of those Jacobs boots. (Later I wore them with pointy black punk-style ankle boots.) Always fishnet knee-highs and either a black or white Victorian style blouse and a red gilet/sleeveless cardigan. I’ve never felt happier than in those outfits – a sort of 1930’s country vixen!

I bought Elizabeth Arden’s Prevage to ‘delay the signs of ageing’ (!) and gave myself lumpy acne around my chin. One lump actually, that came and went. Jonathan bitchily said in front of Marc one day “at least I have good skin” which I found odd because I’ve always had great skin – that product over-stimulated it!

Getting out of a cab and running over cobblestones in the Meat Packing District to meet my husband and an associate of his, I felt like Carrie from Sex and the City. A dizzy joyfulness brought on by clothes, cabs and the grimy romance of the city.

Shopping at an antique market in Chelsea, high on Chinese food, I found a nineteen forties camera brooch with a little flash attached (I gave it to my cousin Lucy because she liked it so much), and a vintage pendant of Mother Mary and the church of Notre Dame on the back.

Spent an evening with my school friend Ruth and her friends (Stick Man, her gay college friend, who collected effigies of penises and devils, and his boyfriend, a charming recovering crack addict, and the salsa teacher from next door). We played Cranium and ate jumbo shrimps and dip.

One Christmas we stayed at the Wyndham Hotel – a somewhat weathered olde worlde hotel with original lifts. They upgraded us to a suite because they were re-decorating. On Christmas Day we ate in an old style diner with Ruth and Michael, her much older boyfriend (he was in his seventies). He was the one to first tell us about The Wire and he gave me a Gurdjieff book (which I still haven’t read). After lunch, we went back to our suite, got into bed and finished off the Ritz crackers and mimosas we’d had for breakfast. I wished for a period drama and one arrived. The Masterpiece Theatre version of David Copperfield. What is it with Christmas and craving period drama?

So many happy and interesting times in New York City. I long to go back to a pre-smart city New York. So many ‘just good to be alive’ moments: a coffee in hand, my love and best friend by my side, believing in adventure – life as a joyful adventure offering us gifts of people and sights and smells to delight or intrigue our senses.

Writing my children’s novel on Avenue A in a café where you had to ask for a key to go to the toilet (before that became normal.). Typing away, further and further into the land of Elbow, before setting off in the afternoons to have my first singing lessons with Wendy Parr.

I had a perfume made for me by CB I Hate Perfume- rose based with tobacco. He’d just had an exhibition in his Williamsburg studio where an artist had designed a display of fruit, flowers and vegetables that were designed to rot- creating a landscape of smells as they did. I was sorry to have missed that.

When we went for the very first time, it was February two thousand and one. We stayed in a hostel on the Bowery. Broome St. and Bowery. There were small mountains of snow in the gutters and a metal grate in the reception. The tiny room allowed only a bed. There were evangelists on the small, bracketed TV on the wall and of course, a large cockroach in the shower. But the pure thrill (that everyone who has been weaned on American films and TV experiences when they visit for the first time) of steam rising from sidewalks, yellow taxis and school buses! And the bliss of eating breakfast in our very first diner, with real New Yorkers coming in and out. The Formica and chrome and the novelty of getting our coffee refilled.

My short film was being screened at the New York International Film Festival. My husband and I handed out flyers to invite people to the screening at Madison Square Gardens. It felt scary and very daring! I met a contact of Meg’s (my agent) after the screening. Don is the author of a book called “Writing The Breakout Novel” and has his own agency. He said my film was “kinda funny and kinda sad”. I met him years later at his office. He liked the pitch for my children’s novel and told me to relay this to Meg: “Retain North American Rights.” That phrase seemed surreal and so promising. I bounced with excitement as I headed back downtown from Broadway on the wide sidewalk. I discovered my favourite bookshop that day too: Shakespeare & Co. on Broadway. A small, beautifully curated interactive exhibition of worlds.

I had a good outfit on that night. A silky-feeling black cotton dress with wide shirt sleeves, a corseted mid section and a short-ish paneled skirt. It was part eighties, part fifties and I wish I could remember the designer. My husband gave it to charity by mistake with a pile of my other favourite dresses due to be dry-cleaned! (He still feels guilty.) I wore it with red suede Terry De Havilland Margaux platforms that I bought in a magical shop in Primrose Hill called Lost in Beauty. On my wrist I wore red leather cuffs I found in Brick Lane Market in London.

There’s something about New York that makes me remember what I was wearing. I love expressing myself with clothes there. In London, I always tend to want to wear the dark, almost military style a lot of people wear. Protective, edgy, invisible – combat wear. When someone wears bright colours in London it always makes me smile. There was a lady in Muswell Hill who used completely embody Frieda Kahlo. She’d brightly adorn the Broadway in several full rainbow- coloured skirts and always had flowers in her hair.

I’m sure half these places will have been replaced by now, but some favourite places in New York were: Ricky’s NYC, Barneys, Bergdorf Goodman’s, Lots of the independent shops and boutiques in the Soho and the East Village; B Bar, Lure, Via Della Pace (a little Italian on East Seventh Street) and any and all old retro diners, whatever state they are in.

I love you New York, and hope to see you soon. I’ll sing to you from across the sea, here at Land’s End, Cornwall, UK, where there is nothing between you and me but sea for three thousand miles. 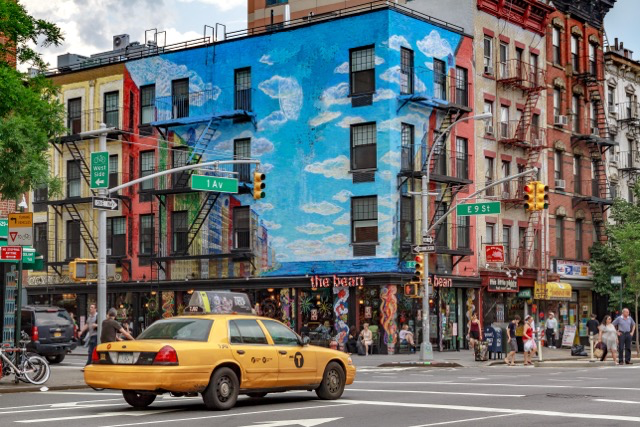